The lads got a mention on Sunday night on a programne called "It was alright in the 1970's" which looks at what wouldn't be shown on today's tv and what would be allowed back then. This weeks theme was sexism and certain celebs give their view on the scene being played out before them, this is what was said about this scene 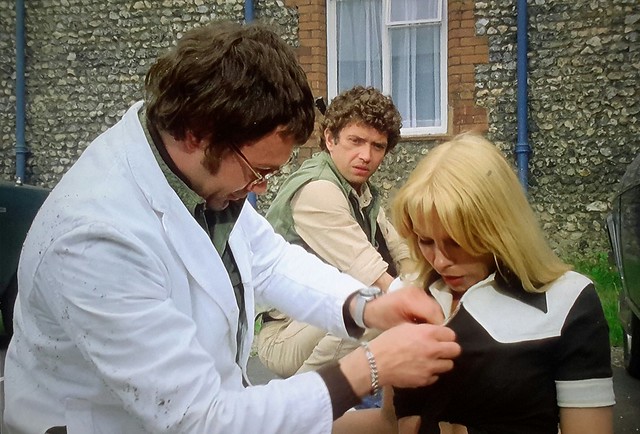 "Enter the professionals with tough guy government agents Bodie and Doyle" then the scene cuts to our lads talking whilst knelt down behind the car and then the celeb gives his view " oh my god no". "she actually does have a hand grenade down her bra"
"in this 1978 episode Bodie slaps a terrified Pamela Stephenson out of harms way, undressess her to safety then galliantly shields her from the blast" celeb then says "he even concocts an excuse to jump on top of her whilst ripping her clothes off and throwing the bomb into the bin" "is she going to be grateful and those glasses are fantastic" the celeb ends with " i mean what we get here is pretty extraordinary, it's an exploitation of a film makers dream, violence, sex and an explosion and all somehow brought together in the same dramatic moment, full marks to them for ticking all of those boxes, actually what i think emerges most from tv of this period is the utterly casual sexism that is never the issue but is always the background buzz of the culture"

"so while sexism was in the background, sex itself was front and centre"

The celeb viewing this was Matthew Sweet, a journalist and viewer in the 70's.
Collapse