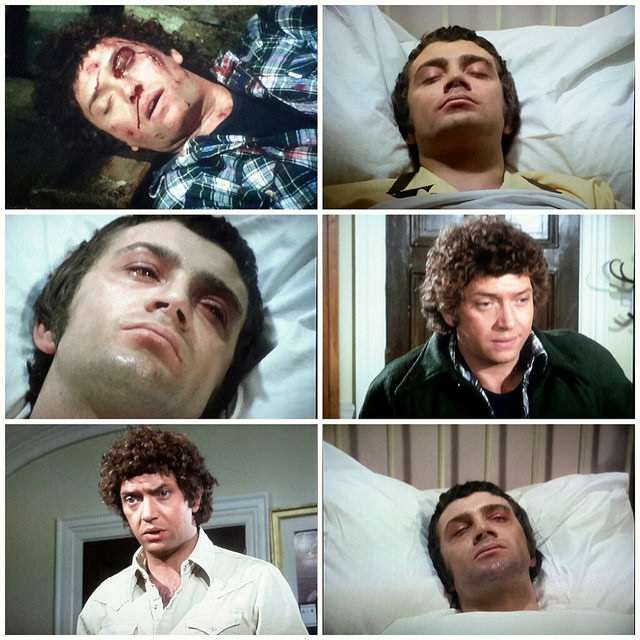 So i decided to watch this episode yesterday and yes before anyone attacks me i know it isn't a lovely subject but really i just watch it for a Bodie who is writhing around in a hospital bed looking rather sweaty and talking delirious.

So we start off with a black man and a white woman and some burning crosses quickly moving on to the lads looking very gorgeous in mr cowley's office upon which Bodie makes his remark , yes we all know which one , then he receives the glare from hell from his boss. Having been sent to investigate they are then left to snoop around the scene having just come across someone being pushed off a roof. Leaving Bodie to investigate on his own Doyle returns to HQ and then onto the scene of Bodie being stabbed (see i'm being sadistic now but i love this scene) and then we get his partner with tears flowing when Bodie is being wheeled into the hospital.

Now comes my scene which i do like , Bodie looking gorgeously injured and sweaty and no lets not mention the yellow pyjammas . Then we have Doyle throwing fits of temper because Mr Cowley wants to pull him off the case ...ahhh that's the Doyle i like.
Which leads us nicely on to Doyle being beaten up and being dumped in the water tower to be found by Tommy upon which he stresses "i had , i've got a friend etc.. bless him .

Revenge is Doyle's in the end and having finally found the culprits we are left to find Mr Cowley waiting to greet Mr Miller who is not what we expect , and then the final scene with Bodie walking away with his nurse and Doyle looking at jax as though he could kill Bodie for standing him up . So all in all not a nice subject matter but lots of lovely beaten up/injured lads.
Collapse